Something interesting is developing in the ratio as can be seen if you visit the live and updated version of the chart.  The original blue down-sloping trend line (as seen in the static chart below) was breached to the upside but the ratio appears to have stalled before even reaching the more dominant one.  Perhaps the S&P 500 has reached another (and lower) peak as priced in VIX units and is about to head lower.  If that's the case, equities are about to continue lower.  It also appears that the VIX may be putting in a new higher low which would also be a very bearish development for equities.

I'd like to show you a chart which was included in an article that I wrote on the $VIX back in June. I don't show it for any particular reason other than to show that it's behaving pretty much as I suggested it would back in early summer.  At the time, I didn't know why the $SPX:$VIX ratio behaves in the manner that it does, only that it does. But neither did I need to know why because in the purest form of TA, as long as we can see a meaningful relationship that reveals information, we can work with it. 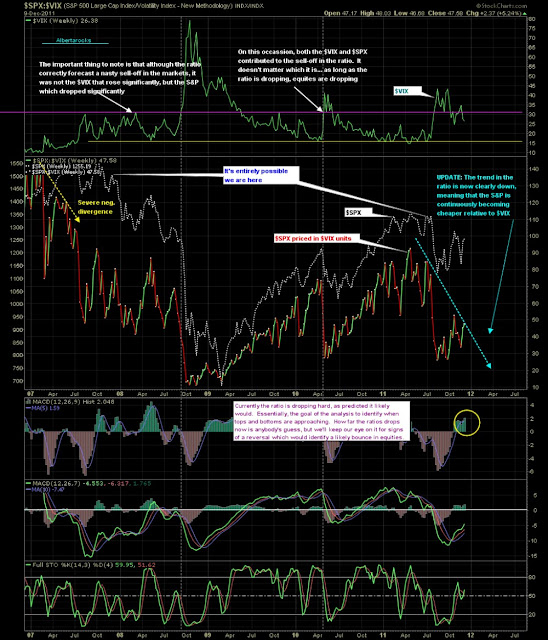 The bottom line is this: as long as the ratio between $SPX and $VIX is falling, equities are heading lower relative to $VIX. In other words lower,  Period, lol. At the present time the ratio is still suggesting equities are likely heading lower. But admittedly, it's still entirely possible that the investing world is going to buy into the notion that the European debt crisis has been solved (YAY!) and the S&P is now headed for new highs.  Perhaps to 1666 before Santa gets here.  In that case, this ratio will spike much higher. I seriously doubt that
happens, but hey... that's what the chart is for. We'll see what's in store in the weeks ahead, but I expect this ratio will likely be stopped at the down-sloping trend line and then to continue to tumble big time.

I was pleasantly surprised to see what John Lounsbury wrote once he'd seen the article that chart came from. From the "for what it's worth" files: John Lounsbury's Opinion

However, even though I didn't understand why the $VIX behaves as it does, in one of the best ironies I've seen in a long time, the very same week another article was published that explained the "why" of it all. It was the best accidental marriage of any two articles one could expect to see. That second piece was written by Shah Gilani and is bar none the best article I've ever read on the $VIX. Since so many investors focus on the $VIX and believe they can take clues from it, I definitely put this article in the "must read' category. I've posted this link numerous times, the latest being not all that long ago. So if you've already read this article, please forgive me for suggesting it yet again. For those who *haven't* read it, I respectfully suggest you do.  NOTE: For reasons unknown, this link might open with a page which suggests it is private or hidden.  It is not. Simply click the link that says "bypass this message": Shah Gilani's Article