One popular method of measuring liquidity and credit risk has been that of keeping one's eye on the TED Spread.  What exactly is the TED Spread?  It's the difference between yields on the 3 month US treasury and the 3 month London Interbank Offer Rate, or LIBOR.  On charts this 3 month LIBOR is usually given the label LIBOR3.  It is generally accepted that U.S. T-bills are risk free while the rate associated with the Eurodollar futures is thought to reflect the credit ratings of corporate borrowers. As the Ted spread increases, default risk is considered to be increasing, and investors will begin to lean toward safer investments. Risk off!  In a nutshell, as inter-bank offer rates rise, it's a reflection of the fact that banks are becoming more and more reluctant to loan money to each other.  Generally speaking, when one loans money he'd like to get it back some day.  In the dark world of giant European banks, these days the odds of getting your money back at all are growing worse with each passing week.  And as a natural result, the TED Spread just continues to surge while the equities markets continue to pretend it simply isn't happening.  Those silly equities markets... they're in for one hell of a nasty surprise.  It should be no surprise, but a surprise it will.be... to all but us.

At one point I became more interested in the question "of the two components that make up the TED Spread, does one move more than the other"?  You'd better believe it... it's the LIBOR3 component that is doing all the moving.  So rather than focus on the TED Spread, I've recently turned my eye directly onto the trouble spot itself, and that of course
is European debt.  So I just watch Libor3 (with the 3 month US treasuries overlaid in the background so I can keep tabs on that one as well).  Many of you will recognize the daily chart LIBOR3 as seen below, a chart that on some sites has been dubbed the "rocket chart".  I first presented this chart in June when I noticed the moving averages starting to go flat after having fallen for two straight years, then running flat for another two years.  Once I saw those moving averages start to cross to the upside, I finally added the annotation "The LIBOR fuse has been lit.  Watch out!"  And the rest, as they say, is history.  Now you know why I went to the trouble to exhibit my considerable chart-art by adding the rocket.  There was no doubt in my mind what was coming.

I'm pleased to report that this chart has been very popular no matter where I've displayed it.  So I thought I might just as well dedicate one entire post to it and provide a link to the live and updated version.  The chart below is static and I may replace it with a new 'snapshot' from time to time as we will continue to monitor this situation right here, on this very post.  But you can hit the link to the live and updated version just beneath this chart and check out the status anytime you like.  Please note that it isn't updated until a couple of hours after the close of trading each day. 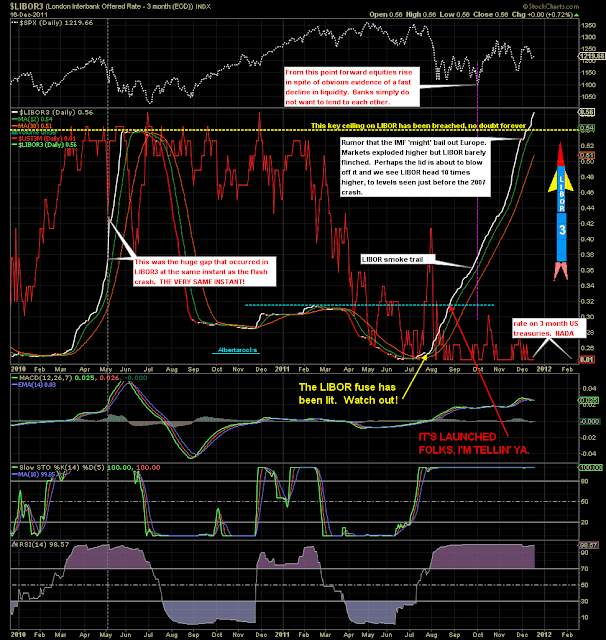 Click here for a live and updated chart
There are a few things I'd like to draw your attention to but none more important than to point out what happened with the entire LIBOR series on May 6th, 2010.  For those who didn't commit that date to memory, that was the day of the flash crash.  First, take a look at what LIBOR was doing during the weeks before that eventful day.  That steadily climbing 'junior' rocket shot was accelerating at a very sharp rate when suddenly, at the very instant of the flash crash, LIBOR3 just blew up.  It literally gapped higher from 0.37% to 0.43% in about a nanosecond.  I know, I know, there are actually people out there who say "pffft, those are such small interest rates I wouldn't even bother paying attention to them".  Keep in mind, that was an increase in LIBOR3 of over 16% in a mere instant.  And that wasn't the end of it either.  Only with the hint of QE2 issued by Ben Bernanke at the now famous Jackson Asshole meeting did the pressure on rates abruptly subside.

Do we need any further evidence than this about the importance of what we're witnessing now... a for real rocket shot in LIBOR3?  Why is it happening?  It's happening because the central bankers are literally losing control.  There is now plenty of speculation that the great orc known as Ben the Magnificent 'might' be forced to initate QE3.  But why?  To what avail?  What difference is it going to make now?  Is the picture from 40 thousand feet not abundantly clear by now?  One thing that 'is' abundantly clear, is that rising rates are going to kill 80% of the most indebted institutions, banks and sovereigns.  And guess what... we have rising rates... in spite of every trick in the book that the bankers have tried, many for the first time ever.  Desperate measures for desperate times!  Clearly, it has been proven beyond the shadow of a doubt that in order to keep equities up where they are and to keep bond markets up where they are (rates as low as they are) the FED (and it's uber-evil overlord, Goldman Sacks) will soon either have to purchase every bond ever printed from this day forth just to maintain the status quo -or- the world enters the most devastating (yet ultimately 'healing') bout of deflation ever witnessed by mankind.  The banksters are in completely uncharted waters.

The second thing I'd like to point out is that LIBOR3 has recently surpassed the ceiling that occurred as a direct result of Bernanke's speech.  And this time, I don't think this rocket is going to be turning back anytime soon.  Do you realize where LIBOR3 was back at the market highs of 2007?  It stood at 5.5%.  That's right, 10 times as high as it is today.  In other words, ever since the market began its meltdown, it has taken a concerted effort by every central bank in the world to do everything in their power to drive rates lower.  Had they not succeeded, the DOW could conceivably be at 3000 today.  Not "conceivably"... "undoubtedly".  But now what?  Now that rates have been held at near zero for more than two straight years, what has changed?  What has improved?  Where has the world gotten any better?  It hasn't.  The global economic conditions have only gotten worse.  Much worse.

And now... rates are rising again.  And this time I don't think there's anything the orcs can do to control them.  Sovereigns are going to default.  50 times the size of Lehman.  And finally, a little more moral support for my theses from Geoffrey Ching, hot off the press.

Be sure to check in often because we definitely want to keep tabs on LIBOR.  If it were to suddenly start to roll lower I'd sure as heck want to know about it.  I don't think there's a snowball's chance of that happening anytime in the next few years, but hey...  I was wrong once before.  It was many years ago... when I though I'd made a mistake, but I hadn't :-)
(... relax folks.  For those who don't yet know me yet, that was just my wacky sense of humour at work)