Regarding HO Signals - A Brilliant Analysis Out of Tasmania

Hello friends, followers, random readers, skeptics, debunkers, and curious onlookers.  It appears we have been given a gift... and I write this article in order to share it with you.

As all of you know by now, the Hindenburg Omen has put forth one of the strongest signals in its history, as judged by the tightest cluster of signals ever produced... as far as I know.  Let's put it this way, with 6
'real' signals in 8 trading days who's going to quibble?  That's a strong enough warning for anybody who is at least half lucid.  Consider this... if you and your lovely family were out sailing on the Gulf of Oman some beautiful Saturday afternoon in your 42 footer, and the Iranian navy fired a 6-pounder across your bow, you know darned well you'd take notice.  The prudent sailor might even take the hint and reverse course.  But naturally there are always the few heroes who might be considered as... what's the best word... daft... the ones who would wait for a second volley just to be sure.  Not a smart choice in my opinion.  Not when taking cannon fire.  And especially not when the HO is firing the volleys.  For, he who dares hold his course even after 6 rounds have whizzed past his nose, each successive shot being closer than the last... well the odds are high that sailor's ship is surely destined to take one up the assigned target.

So now that we've accepted that the current Hindenburg Omen event is at the very least the real deal, we should embrace this rare opportunity to pay attention and watch how the drama unfolds.  And to that end, one of the questions that has been asked most frequently as of late is this; "Does the number of signals, or the type of cluster, have any predictive value about the extent of the decline that might ensue?".  The short answer, the most common response, and the answer I have used to squirm out of doing a ton of work in the form of back-research, is "No!  Once the HO has issued a confirmed signal, as far as the number of signals is concerned, all we can do is refer to the past history of 'what happened next' and take our best guess.  The actual number of subsequent (and redundant) signals is of no value in determining how far the NYSE might drop.".  That also happens to be the 'correct' answer.

But I have never heard this question asked: "Does the steepness of the rally prior to a confirmed Hindenburg event offer any predictive value?".  What a heck of a great question that is!  And one would have to think that of all the factors to ponder, that is probably the most logical one to investigate.  I have never done that investigation.  First of all, I didn't even think of it.  And secondly, it represents a lot of work, too much for the little time I have.  In fact, keeping my eye on the HO and reporting on it has taken up way too much of my time and focus over the past 4 years as it is... to the extent that I haven't published any article on any other topic since March 16th.  I have other things to do you know.  I have to tend to things.  Like, I take a bath every single month... sometimes more than once.

But wait!  The strangest thing just happened.  Right out of the blue, at 2:00 in the morning on Friday, an old friend of mine from Tasmania who I haven't seen in at least 2 years pops up on Seeking Alpha and drops the whole bundle on my desk.  Let me back up a moment and tell you who this guy is.  He's an occasional commenter who goes by the name of Wave Rider.  Why the name Wave Rider?  I can only guess, but since he's from Tasmania I think it's safe to assume that he has done a little surfing somewhere along the line.  I hadn't really spoken with Mr. Rider all that often in the past, but I definitely remember him and do recall that we had some nice exchanges, beginning perhaps 3-4 years ago.  To be honest I don't even remember where that might have happened because we first met before 'this' blog even came into existence.  On second thought, it was probably over at Seeking Alpha.  In any case, I recall that Rider made a lot of sense and he was a nice fellow.  The type of guy I'd love to have a beer with some day.


With the name Wave Rider maybe he's referring to Elliott Waves.  But I can't help but to think of Tasmanians,  Kiwis and Australians as wavers of the water sports variety.  One thing I will state with all seriousness though, over the past 5 years I noticed that Aussies and Kiwis, for whatever reason, have amazing talents at technical analysis.  I'm dead serious... their ability to make sense out of mayhem regarding Elliott Wave Theory is truly impressive.  Coming up with Elliott Wave predictions is as much an art as a science and it's not easy to do.  I don't have the patience for it.  I don't thrive well in an environment where "being wrong quite often and having to find a viable alternative" is acceptable.  As a natural response to my own ineptitude, I have become acutely cognizant of real talent when I see it.  And those deep Southerners have it in spades.  Not to disparage accomplished EW practitioners from many other parts of the world who are very good at it as well.  It's just that... I don't know what it is, perhaps it has something to do with living under the Southern Cross, but man... people living 'down under' just seem to have a slightly different type of vision.  Clearer vision.  And it appears that applies to people living on Tasmania as well.

ENTER WAVE RIDER:  Right out of the blue, totally unsolicited, this man who seldom speaks pops up out of nowhere at 2 o'clock in the morning and delivers one of the finest detailed, properly focused, thinking-outside-the-box, analyses I've seen in quite some time.  It's targeted at exactly the right question: "Does the steepness of the rally prior to a confirmed Hindenburg event offer any predictive value?".  Wave Rider actually went to the trouble to do that analysis, going all the way back to 1986.  And then he handed it to us.  What a gift!  Not unlike Satoshie Nakamoto of Bitcoin fame.  But unlike Satoshie, Wave Rider does indeed exist.  With his gracious permission, I'm proud to offer readers his report as follows:

His basis: "I have always been interested that the number of sightings of the HO in a cluster does not seem to be a predictor of the strength or timing of any subsequent downturn. I have therefore been spending some time on the keyboard examining all the data associated with the recorded confirmed HO's going back to 1986."

His qualifiers: "Rather than use the DJIA that Dr. Robert McHugh used, I have used the S&P as it probably gives a better indication of the wider market. You still get the same approximate proportions of declines that are regularly quoted for the HO. i.e. 25% of the time the market falls by 15% or more, etc."

His general observation: "The interesting thing though, is that while the number of sightings in a cluster is no real guide to the dimension of any decline, the pace of the rising market before a confirmed HO is. Generally, the majority of confirmed HO with subsequent major declines have come after the market has averaged a gain of over 0.08% per day since the low that followed the previous HO. How long ago the last HO occurred does not seem to affect this observation."

Wave Rider's Conclusion: "The interesting thing about the cluster of HO you are currently recording is that the average daily gain since the market low following the last confirmed HO is the second highest on record. That assumes the May/June HO is considered a different one to the August one we are currently monitoring (AR's note: correct assumption). This suggests the present HO could be a portent for a very significant market decline indeed."

An additional point: Hence the rule "The faster they rise the further they might fall". Incidentally, the average daily growth rate before the August 5, 2013 HO was 0.193%. That is by far the highest ever, except the doubtful Dec 1998 HO."

I also hope readers appreciate how many hours went into this analysis.  When I asked Wave Rider for his permission to reproduce this meaningful work, he graciously granted it although initially he hadn't anticipated that his offering would reach this wider audience [yes, this blog gets far more weekly visits than the HO blog at Seeking Alpha does, not to mention the huge exposure that Global Economic Intersection will also be providing for Mr. Rider's Opus].

As a result of my request, WR revisited his work just to make sure he was satisfied with it, and then did offer a few additional comments and clarifiers.  In order that you can easily find all his commentary, I'm happy to provide this link that should take you directly to the bundle he initially dropped on my desk, this one which will take you directly to the comment which includes his data set, and this link which would take you to the entire blog where you can scroll the comments section to read Wave Rider's additional commentary and detail, after the fact.

On behalf of all readers, I offer our sincere thanks Wave Rider. We should also accept and acknowledge that Mr. Rider did not make any prediction, he simply presented a beautiful piece of work for our consideration... which is exactly the same as what the Hindenburg Omen itself does.  The HO simply presents the facts and contrary to popular misconception, does not make any predictions.  With that sorrily-misunderstood fact now finally (hopefully) becoming clear to the debunkers, we recognize that Wave Rider's analysis is simply much too good to languish in that now-very-quiet room over at Seeking Alpha.  This is very valuable stuff.  And for that... payment is in liquid gold: 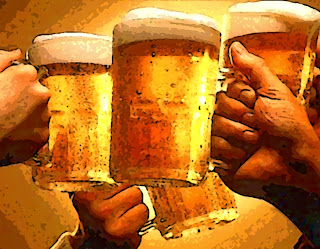 Posted by Albertarocks at 3:00 PM