Rates About To Support Huge Equities Rally... What Next?

All of a sudden it dawned on me that I think we had better start to pay considerable attention to what's been happening recently in the bond markets.  Ever since November of last year, the entire rally in equities was pretty much in complete defiance of falling rates (stronger bond market).  Normally when rates are falling, that means bonds are rising so equities should be falling with rates.  But since November they haven't.  The equities markets have been supported by Goldman Sacks, JPM, BAC and the rest of that satanic den of vipers until the day the bond markets woke up.  It looks like that day has quietly arrived.  Normally it's the bond markets that dictate where equities are going, not the other way around.  But not this time.  In any case, it is what it is and now... 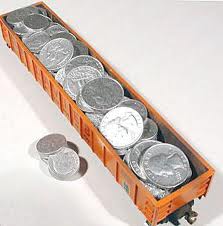 ... all of a sudden rates are exploding higher with all indications suggesting they have a lot further to rise.  Rising rates would be in total support of rising equities prices.  Unfreakingbelievable, but it appears that's what might happen.  Rates certainly appear to be on the verge of exploding higher, meaning a ton of money will be fleeing the bond markets.  This time may indeed be very different though, insofar as that the "reasons" for rising rates today are unlike any reasons in prior history and they're not good reasons.  They're very, very bad reasons.  So undoubtedly a lot of that cash fleeing the bond markets will be required to retire leveraged debt that was created just to buy those bonds in the first place.  It'll just vanish off the face of the earth.  But without doubt, an absolute shitload trainload of it would still find its way into equities.  God damn!  But hey, if that means bears have to swallow their pride and make some money on the long side for a change, buying TNA tomorrow might be the smartest thing we've done in the past year.


I can just hear Dimon now: