As Advertized - NDX Breaks Down As AAPL:NDX Ratio Tumbles

As I've been pointing out for quite some time now, the value of APPL shares when priced in terms of the NDX 100 is undoubtedly one of the most important metrics we can study when trying to get a handle on the future direction of the entire tech sector.  Ever since the March 2009 lows in the equities markets, AAPL has been a clear leader and is largely responsible for the remarkable recovery in the entire tech sector.  For those who might not yet be familiar with that analysis, feel free to take a look at the article published on January 1st which includes numerous charts as well as discussion explaining why this ratio is so telling.  My apologies to those who have read the article before and who have seen so many links to that article that they're getting sick of it.  I sorry.  But for the benefit of those who might not yet have seen it, it's crucial to understand why the study is so valuable in it's predictive qualities.

Well in spite of this morning's glorious launch in the grossly manipulated equities market courtesy of the wormy minds power brokers within the banking community, a blastoff which painted promises of a new and exciting green week in the equities markets, the AAPL:NDX ratio is telling quite a different story today.  Just last Friday, we presented a short piece detailing several charts and indicators that were pointing toward a pretty darned negative outlook for equities.  That brief article, which included a good variety of charts, appears to have been pretty much on the mark.  In case you missed it, and if you're interested in reviewing those charts, complete with links to live updates, please feel free to visit "I Dreamed About a Little Bear Last Night".

As of this morning, AAPL seems to be confirming that at least a pullback is finally underway.  But most importantly, although the NDX 100 is dropping with some gusto (at the time of this writing down 1.01%), AAPL is falling more than three times as hard (down 3.2%).  And of course, as a result the ratio is turning south with a vengeance.  What's most notable is that important trend lines have been broken in all three, AAPL, $NDX and in the ratio between the two.  The implications are decidedly bearish for equities in general because the NDX 100 simply cannot continue higher if this ratio is breaking down.  When a single stock that represents a full 17% of the entire value of the NDX, (a stock that is worth more than all the stocks in all the stock exchanges of Portugal, Greece and Spain combined) starts to pull the NDX down, the NDX is going down.  AAPL is one powerful horse and it will not be denied.  And you know what this means folks.  If you don't, you haven't read the article yet.

We start by taking a look at the daily chart of AAPL which shows so clearly that a major trend line which has been providing solid support all year has now been cracked with a certain degree of enthusiasm:


The most important detail is that although the Nasdaq is in retreat today, its major component is falling with triple the conviction.  The net result is clearly shown on the chart of the AAPL:NDX ratio which itself has finally broken the first of its own rising trend lines, a trend line which has not only been rising since the March 2009 lows, but accelerating relentlessly the entire time.  However, we should exercise a bit of caution and realize that these developments only represent an 'initial breakdown' because in reality it is only the very steepest of the trend lines that has been penetrated.  We mustn't get too overly confident that a major crash in the NDX is imminent because there are still formidable rising trend lines beneath this ratio.  We have to consider that they will hold until proven otherwise.  But as of this moment it appears that they are going to be tested in the coming weeks and that the Nasdaq is in the process of putting in a correction 'at least'.  In the daily chart below, we get a pretty clear picture that trouble is brewing:

So as I was describing as early as a year ago, it was inevitable that day would eventually arrive when the ratio between the largest single stock in the world and the NASDAQ would betray a major change in the direction for equities.  We are apparently now getting the earliest of those signals.

With all the above information in mind, I also don't mind reporting that coming into the trading day today I was slightly positioned short the market and 92% in cash.  However, today's convoluted action, action clearly designed to suck in as many bulls and bears alike then whip them around much like a dog shakes his favorite slimy rag doll, I did indeed get deked out just like everybody else did... for a moment.  I added to shorts.  But when the downward reversal this morning did not develop in the S&P 500 nor the Russell 2000 as it did in the Nasdaq, it became evident that in the latter 2 indices a clear 3 wave structure had developed to the downside, implying higher prices in the coming days.  In the 30 min. chart below of the S&P 500 we can clearly see the 3 wave structure that has evolved (something I was not expecting at the open of trading today).  I do not profess to be an expert at Elliott Wave Theory so I rely upon the visions of my friends who are.  However, I also have enough support for my new-found expectations of a bounce from other TA signals that I'm fairly comfortable with the strategy now in place. 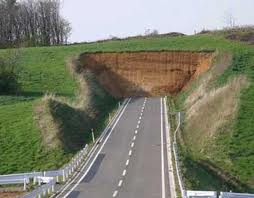 Although I'm quite convinced that any bounce we see throughout the remainder of the week is OPEX related, I'm also quite confident that it should be short-lived.  Based on this morning's fast moving developments, and with full support of a few TA signals I need to see, I bailed out of the shorts positions which I had added this morning with a very small loss... and reversed them in the name of safety.  I converted them into a hedge position which will most likely end up being more lucrative by Friday than any losses incurred by the core short position.  Considering that Max Pain for SPY is way up there at 139 and for IWM is way up there at 82, if there's one thing I have an extreme amount of faith in it's that if there is money to be stolen the manipulators know where it is and have the power to take it.  But I have little doubt that any bounce this week will end up being a dead end street.  So barring yet another convoluted reversal to the down side, I now expect that for the remainder of the week I'll be positioned "short the Russell and long corruption".  By Friday I fully expect be in the green for the week and in great shape to add to core shorts with somebody else's money.  Hopefully Goldman's, but what are the odds of that?

In the chart below we see the potential building for a beautiful H&S pattern.  At first I was expecting the right shoulder to peak at the end of opex, Friday April 20th.  But now I'd have to say that's too early.  In any case it's definitely a pattern to keep our eyes on.  If you like you can click the link beneath the chart for the live and updating version, and bookmark it.


Best of success to all and I bid you a great, great week :-)

Posted by Albertarocks at 12:11 PM